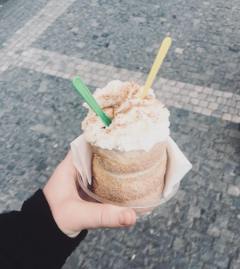 When we first started this blog, I also wanted to create a type of travel blog that would allow us to look at food and see how we liked it, recreate it, and find out if it was just a tourist trap or if it was actually the type of food that was eaten there in everyday life.

I really enjoyed traveling to Prague. It was an amazing experience that opened my eyes. It was my first time in Europe, and most people wouldn’t think about going to Prague for that, but it was probably the best time traveling anywhere. Would I go back? Definitely.

There was a lot of food that I tried and I honestly was more excited about that than anything else. Prague is sort of a more tourist-heavy city but there are a lot of different places in the city where you can go to experience the real deal (food, architecture, culture, and people). If you honestly wanted to, you can go near the old town square and eat at Hooters, but I would advise against that.

*A quick mention: If I look cold in the majority of this photos, that is because I was, it was March when we took this trip (Over spring break). My mother advised me to bring a coat, otherwise, my stupid self would not have.

I went on this trip to Prague for my Geography degree. In order to get your degree, you’ll have to take this travel class. One of my professors works in the Geography University there so we were lucky to go to this certain city. We did several things throughout the day, one thing including was climbing to the top of the “Church of Our Lady before Týn.” This was an amazing experience not a lot of people get to experience. We climbed to the very top, higher than the bell. 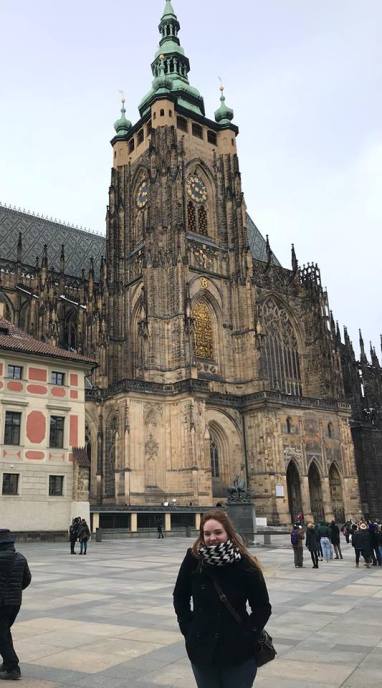 Our professor of the trip made sure we were eating some of the more traditional food in Czechia. The first night there we had Guláš (goulash) with bread dumplings. Which was very good and not far off of something we would eat in Iowa. We also ate other dishes like Řízek (schnitzel) and beef tartare. If you visit, make sure you try some of the street food vendors. They typically only take coin/cash, but its definitely worth it. The featured image of the fried doughnut with the whipped cream and cinnamon on top was stuffed with a mixture of something you would put into an apple pie. It was DELICIOUS. You were also able to get them stuffed with Nutella and ice cream, but we just ate at a different place so I did not want to get too full. (Pictured above guy eating one of those doughnuts.)

Even though I was okay with eating some of the traditional dishes around Prague, I still craved something “American-ish.” I eat fish and chips all the time, and they did a very good job. It was so fresh, salty and crunchy from being fried, with a fresh lemon over top… Oh man, I am hungry for it again. This was around more of a tourist area. 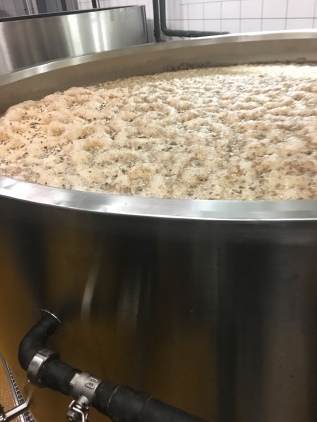 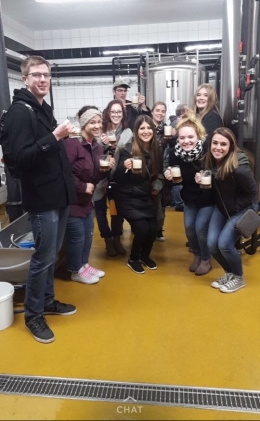 We also went to a brewery. We took a tour to see behind the scenes of how they start from the beginning to how it comes out. We even got to taste a lot of the beer levels too.

There was a lot of good food. It was fun to see how people ate in other countries. There was a pizza place right by our hotel and it something you would have paid at least $20 American money. It was cheaper, hot, fresh and the best pizza ever. There was literally pizza everywhere in the city. Certainly didn’t help me with my pizza addiction.

Confession: I drank so much coffee here. A cappuccino was more delicious than the sugared iced drinks here that you can grab at Starbucks. Pictured below: This was at a restaurant near Čertovka, in the Malá Strana district. I chose the gnocchi dish. It was extremely thick along with being rich in flavor. Good thing I had some beer to cut through the heaviness of this otherwise I don’t think I would’ve been able to walk from being so full. While I was there I drank the lighter levels of beer, along with cider, and lots of wine. The wine that I had at our hotel was only $3 a glass. It was several very refreshing wines; this trip was the thing that started me drinking prosecco.

One last thing I have to admit before I finished this post is during this trip we went to McDonald’s. It seems weird to me that the McDonald’s that we at was good. I didn’t realize what it was like to try something in another country that we have the same exact thing of. I know that in each country it is different ( they fit to the needs of the places they are at). Eating at the McCafe was pretty tasty too. They have amazing coffee. Not as amazing as the local shop down the street but it was good.

Overall the shopping and trying new experiences and going places without knowing where you really were was kind of fun. If you guys like seeing stuff like this, let me know. I want to try making goulash, with the bread dumplings. That post would be a good one.

Here are some good pictures of our trip:

Show others this great recipe:

This site uses Akismet to reduce spam. Learn how your comment data is processed.